End of my blog

Today will be my last post on this blog. I have posted here for ten years but over the last 12 months or so the blog itself has become dysfunctional. I have tried to repair the faults by reporting the problems, following information on help forums and talking to others I know with technical experience but my efforts are not fixing the fact that I can no longer reply to posts and interact with any followers or visitors. The interaction was one of my main reasons for blogging.

This problem can also occur when I  try to comment on other people's blogs so I will not be commenting in the future but there are a few blogs I read. I have no inclination to start a blog with another blog provider.

Thanks to everyone who has read or commented on my blog over the years. I haven't decided yet if I will delete this blog.

It's a long weekend here.
People are enjoying their 3 day weekend.

I'm feeling depressed as my cat was bitten by a snake yesterday afternoon and died overnight at the veterinarian's.

Normally I try not to put private personal posts on my blog but in the last 6 months there's been the death of a family member and 2 family pets. It's a lot to cope with.

Thanks for your understanding if I'm not as frequent with my posts as I want to be.

R.I.P. Fibonacci.
We are going to miss your happy-go-lucky attitude. 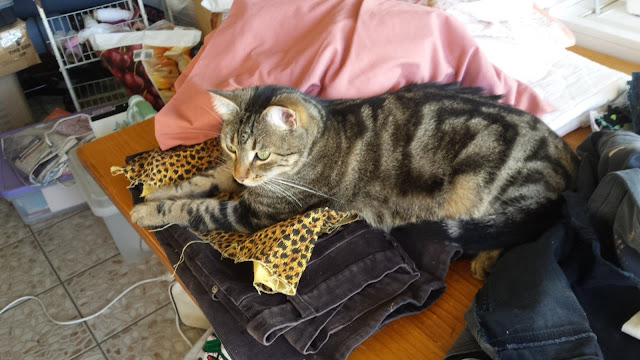 I've been wanting to try growing berries for years, but never made the commitment as the plants weren't cheap, and I was nervous of not caring for them properly and killing them.

I purchased some half price berry bushes a few weeks ago as they were old stock. A thornless blackberry, a raspberry and a blueberry. I began planting them into the gardens on Thursday. Home nurtured compost was dug into the soil, plants will be watered in with seaweed fertiliser and mulched with matured horse manure and straw. The pH in that garden usually averages 5.5 along the fence line so all the requirements for healthy growth should be met.

They may need a shelter erected above them which will prevent any potential sun burn in Summer and frost burn in Winter. Now we need to keep a watch for ambitious finches and other winged pests in case a more intensive screening is required so I can harvest fruit before it is stolen.

Looking forward to possibly harvesting some fruit this season.

Email ThisBlogThis!Share to TwitterShare to FacebookShare to Pinterest
Labels: gardening

It has been busy here lately and I have neglected to take photos of activities. Projects have been a bit disjointed too, so I felt I didn't have anything worthwhile to post. Life can be like that at times. Much happening but nothing being completed.

A couple of weeks ago we bought a pie maker. I used it today and made one of the recipes in the book that came with it.

The recipe was Moroccan lamb with chickpeas.

I changed the ingredients a little as the recipe required using lamb chops, cut up into small pieces and fried, but I had neck lamb chops that I'd slow cooked previously and stripped the meat from. The recipes in the book also used frozen pastry for the pie cases but I made shortcrust pastry for the bases  (recipe below) and used frozen purchased puff pastry for the lids.

Sift flour, then stir in tallow pieces. Rub tallow into flour until mixture becomes crumbly. Stir in butter pieces and rub those into flour until mixture resembles breadcrumbs. Add chilled water to flour mixture a little at a time, stirring in with a knife. As soon as flour mixture begins to come together gather it with your hands into a ball. Knead until smooth, being careful not to warm up the dough too much, form into a large pat and wrap with plastic wrap. Place in a cool area, or in refrigerator, for at least 30 minutes to rest before rolling and cutting into pie bases. This will make 8 pie bases for my Sunbeam pie maker. 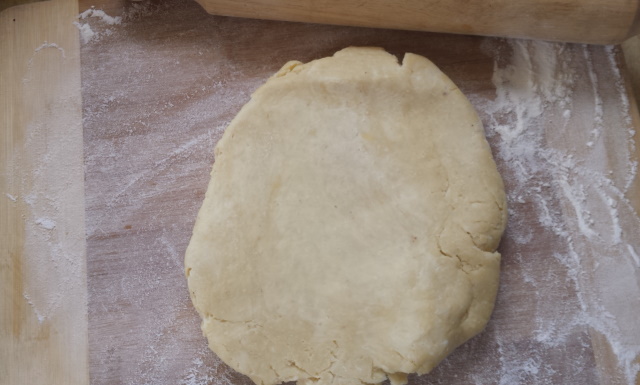 All the ingredients were added gradually to the frypan. The kumera was the last addition, and it took quite a while for it to cook sufficiently enough to be used in the pies, so in future I will pre-cook it then add it to the ingredients in the frypan. 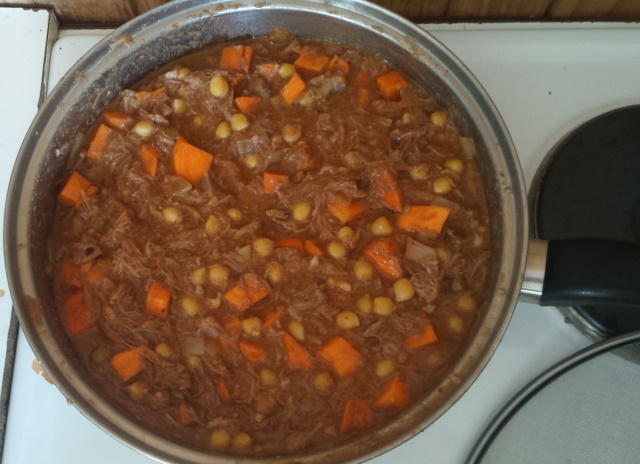 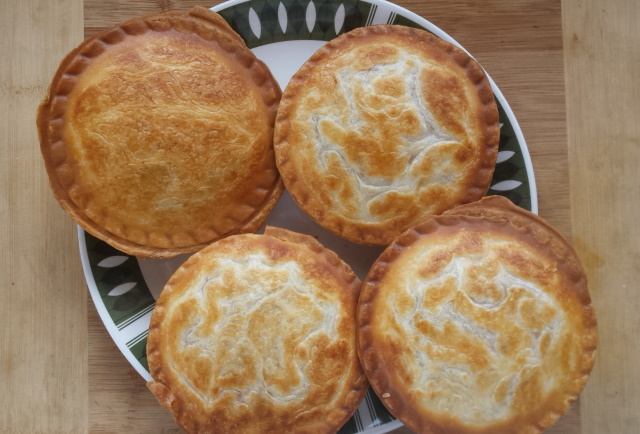 For lunch I just added spinach as a vegetable as the pies are quite large. 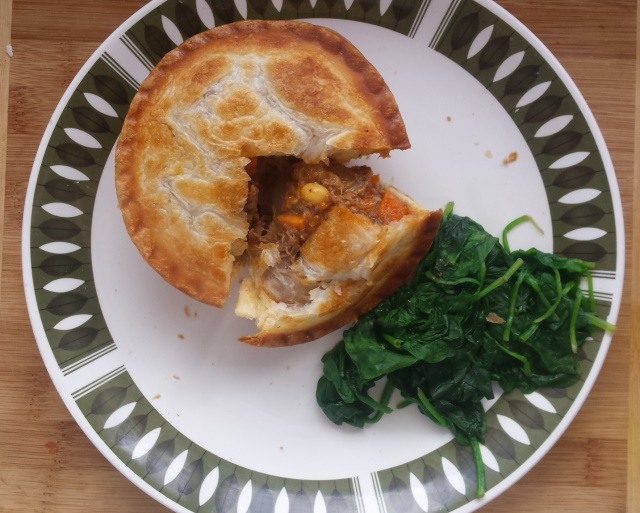 We were delighted with the flavour that the garlic, spices and coriander imparted to the filling. As the recipe made enough for 8 pies, and I cooked 4, I froze the rest of the filling, along with the other four pie bases I had cut, to make more pies next week. There are 2, of the 4, pies I cooked today that will be lunch tomorrow.

Update on the muffins from this post: they freeze well and thawed out they are a similar texture and taste as when first baked. This makes the recipe a definite keeper!

There were some apples becoming a little over matured to eat so I decided that I should use them before they ended up as chicken fodder.

I quite enjoy muffins, but haven't made apple muffins for years, so I did an internet search and discovered this recipe. The recipe appealed to me as it uses wholemeal flour, and contains other ingredients I would normally have stocked in my cupboard or pantry, so no special grocery shopping was required. 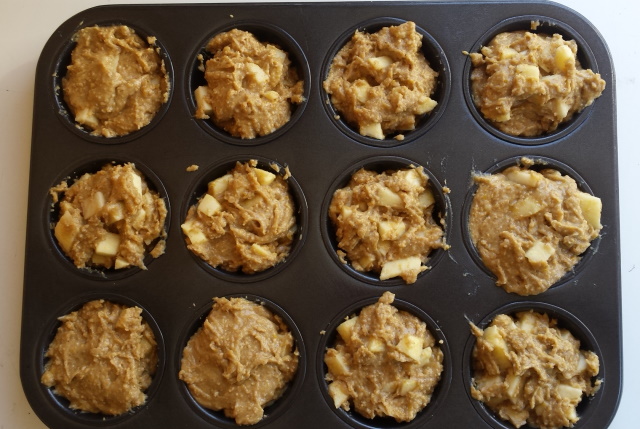 Before baking. Handy that there's no guess work as the muffin cups are just filled to the top with the mix. Obviously more practice is needed to ensure equality of size 😄. 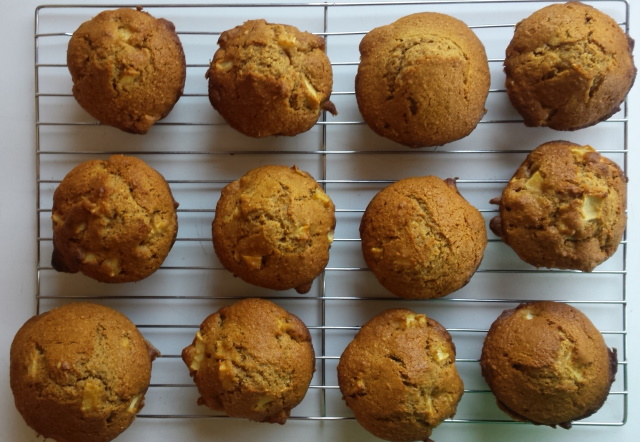 The finished products. Due to the wholemeal flour used they are a tad denser than a white flour based muffin but, I feel, nicely light and moist throughout for a fruit muffin with a great flavour. I used Pink Lady apples.

PC can't eat fruit so I made him some chocolate muffins, using grated fresh beetroot, as this is another recipe I've wanted to try as it is supposed to keep the muffins moist while they are stored.

I decided to grate the beetroot in the sink wearing rubber gloves to minimise the mess. 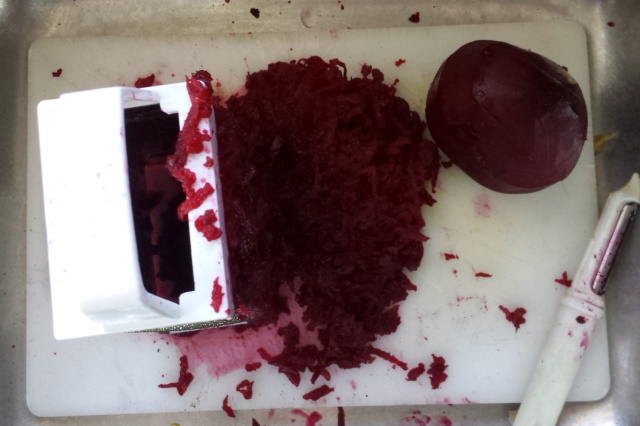 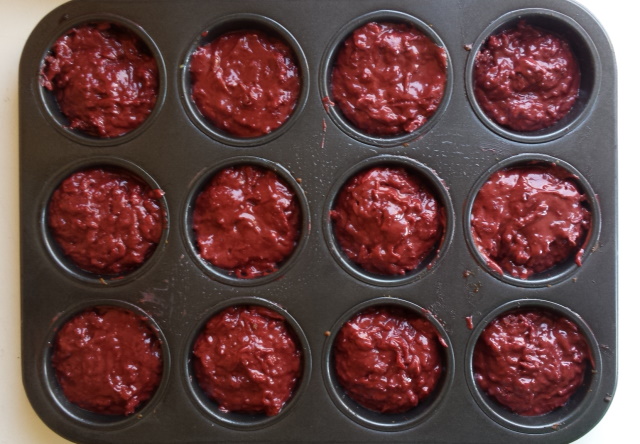 This mixture was more fluid than the apple muffins so a little easier to ensure equality in size. 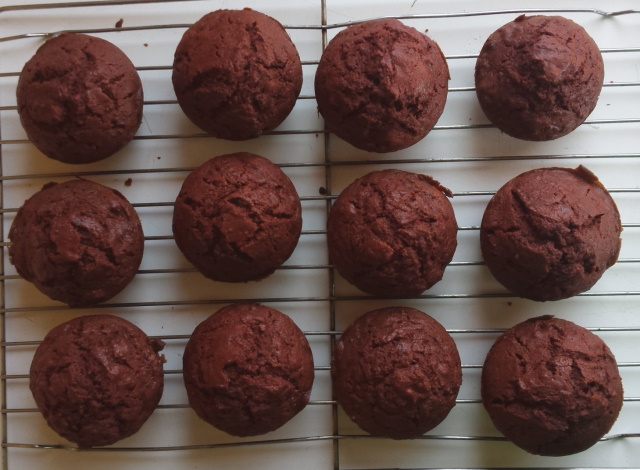 PC commented that they are chocolatey enough and there is a mild sweet aftertaste that is not unpleasant. He tried 3 just to be sure! The texture is light and fluffy.


Both recipes are supposed to freeze well. More information on that at a later date.

After the preparation, baking and cooling (not too much cooling!) we decided to try them for afternoon tea with a cuppa.

Do you have a new or favourite muffin recipe that you use?